Want to grow peonies outside of Zone 2-8, check out what other gardeners say!

There has been many questions about Growing Peonies outside of Zones 2-8. As I encounter peoples' experience in growing peonies outside of this zones, I shall post them here for your reference.

Please note that I would recommend you treat these posts as a way of "experimenting" if indeed you can grow them in your area. Perhaps start with 1 plant and observe how it does in your microclimate.

Peonies appreciate cold weather and require at least 30 consecutive days of below freezing temperatures. Where your area tends to get hot by late spring, buy peony varieties that bloom early in the season. For example, in California, peonies bloom from late April through early-June so avoid buying late blooming peonies.

And areas such as Southern California, plant them so that the eyes are covered by only 1/2" of soil.

ZONE 18: Above and below the thermal belts in Southern California’s interior valleys.....: "though the climate supplies enough winter chill for some plants that need it, it is not too cold (with a little protection) for many of the hardier sub tropicals like amaryllis. It is too hot, too cold, and too dry for fuchsias but cold enough for tree peonies and many apple varieties, and mild enough for a number of avocado varieties."

I live in Studio City, part of Los Angeles, and I've had no problem getting peonies to grow and bloom well. You do need to plant them with just the tips under the soil, and maybe give them a bit of afternoon shade in summer. They do not need a cold period in winter to bloom well. This is a myth. They do need a dormant period, so make sure you cut the branches down by November if they haven't gone dormant on their own.

Tree peonies don't seem to have a problem going dormant here. Late flowering peonies can get waterlogged in our late spring foggy/warm weather and then ball and not open well. However, late blooming single, semi double, and many doubles do fine here.

Don't fertilize the plants after May in this area. Regarding the cold weather in winter for bloom, I have had peonies blooming in my garden here for over ten years, and they bloom just as well after a mild or warm winter as they do after a colder winter.

Some friends are growing some selected peonies in Orlando, Florida and with great success. Actually, we who live inCalifornia have the advantage of growing many of the tender peonies that won't take much cold. We even have a native California peony that grows in the hills in Los Angeles. Good luck with your plants!

<< OK, Pierre, I think you need to come clean as to the varieties that you
are growing down there!!
>>

You have me on a subject that I can get carried away with easily! But you asked, so I will try and answer the best I can. Be prepared, it might be a long answer! I started to garden in Santa Monica, which is an area on the ocean,
in the Los Angeles area. I lived in an apartment at the time, so I was on a long list to get a 15 ft X 15 ft garden plot in a community garden.

Finally,  In late November over ten years ago, I planted my first plants, after having
received my first garden. I planted one tree peony, and the peonies Festiva Maxima and Sarah Bernhardt. Other gardeners asked what I had planted in the garden, and that was when I first heard anything about peonies needing cold winter temperatures. Of course, I was told they would not bloom here and that I was wasting my time. Well, they did bloom and grow well.

I came from an area around Nice, France, where in my parent's garden, we had olive, orange, and lemon trees, and jasmine and mimosa bloomed in February. The weather was very similar to that of Southern California. We grew borders and borders of different peonies there, and had the advantage of having some beautiful wild
species that grew in the hills just behind our home.

Later, I moved to Hollywood, and with me, the 30 or so peonies I had collected over the years in Santa Monica. The climate there was similar to that of Santa Monica. No frost, and mild winters.

Then, I moved to the San Fernando Valley, which is a desert climate with some ocean influence. There
are a few light frosts a year some years, and others none at all. This past year for instance, we had some light frosts, but I still had tomatoes producing at the end of December outside. I can grow sub tropical plants without any worry of frost damage. I grow over 100 cultivars of Lactiflora peonies, and they all bloom just fine, and grow well. I also grow the wild species P. lactiflora that was gathered in Siberia (least this is the plant that is given the name, but the parent plant was growing in Siberia).

It does just as well here as the rest of the cultivars. As time went on, I had a great interest in the wild peonies, and had a friend who was a member of SPIN ( Species Peony International-I think!), and he had many seedlings
from a great number of species, which he shared with me. I have peonies like P. obovata, from seed gathered in the cold Manchuria to the P. Rhodia from the island of Rhodes. The last plant, by the way, went dormant in the heat
of summer, and is now beginning to grow again and is expected to bloom around Christmas.

The lactifloras can start to bloom here around Valentine's Day, and continue until late May, depending on the variety. Some of the tree peonies are blooming here in early January. A few years ago, one of my tree peonies that went dormant in late October, was blooming during a warm spell here at Christmas. I have had fun hybridizing the peony species with the latiflora cultivars and have some interesting crosses, like P. parnassica X Kansas, which bloomed this year for the first time, with almost black flowers (darkest maroon).

I can't say that any peony has performed badly here. The only problem I ever had was that during the hard winter rains, I had some plants that became waterlogged and rotted away, but otherwise, as stated before, I have the same quantity and quality of bloom after a mild winter or a warm one. All the species, and I have over 20 of them, do well, and all other cutlivars do just fine.

I have a friend in San Diego who is growing Duchesse de Nemours, Festiva Maxima, and Albert Crousse, and they bloom wonderfully well there, and their winter temperatures is warmer than here.

Another friend and his wife who live in Orlando Florida have done well with a some lactifloras, too. No problem getting them to bloom, much less break dormancy. Anyway, I've gone on much too long on this topic. In short, yes
peonies can bloom well in many mild winter areas!! At least, I haven't met one that hasn't yet!!!!

A couple of days ago, I received an order from someone who lives in Santa Cruz, California (zipcode 95060).

Last week, I was surprised to receive an order from California. So, I called the customer and learned that actually, she has been growing peonies in her area for 10 years now.  At least thirteen (13) peonies! And, she ordered 6 more varieties. Miracles!  How great it is for her. and for all of you in pocket areas of California! Time to go bold and experiment with at least 1. You just never know!

Here are some examples of what she has: Comanche, Hermione, Hot Chocolate, Moonstone, etc.

Another one in Mira Mesa, San Diego, California
Again, here is a gardener able to grow peonies in an area that I didn't think would grow peonies successfully. He is thinking of getting a Julia Rose Itoh this time. He has Bartzella Itoh growing now.

This grower has over 75 peonies - herbaceous and itoh peonies.  He is growing them commercially for cut flower production.

Growing Peonies in San Jose, California, Definitely works in this area.
Peony lovers' who grow peonies in San Jose, California - peonies begin blooming late April thru early June. In choosing peonies for this area, make sure you choose varieties that are Early bloomers and Mid bloomers. Mid-Late to Late bloomers will disappoint you. Example: Sarah Bernhardt won't do well here.

Iwas told that they plant their peonies away from the area that receives the highest sun during the day. They, too, are experiencing success with their peonies.

This week, I was informed by a facebook friend that he successfully grew ITOH PEONIES in his garden in Dallas, Texas. AND, a buyer informed me that ITOH PEONIES grew well in So. California as well. She told me that she learned about it from Sunset Magazine! There's hope for Peony Lovers in those states. 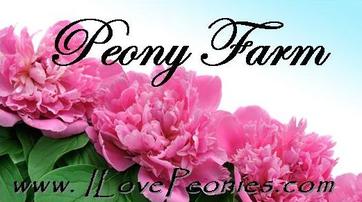 About Tree Peonies
Featured Peonies
About Us
Contact Us
Calendar of Events
Agr. Zone Map
Links

About Herbaceous Peonies
About ITOHS

Please note that all the above information are not based on my personal experience or knowledge about growing peonies in the areas described.

My recommendation is if you really want some peonies, start out with 1-2 and know that you are EXPERIMENTING. Plant each one in a different location so you can determine which is a good spot for your peonies

Growing Peonies successfully outside Zone 2 to 8